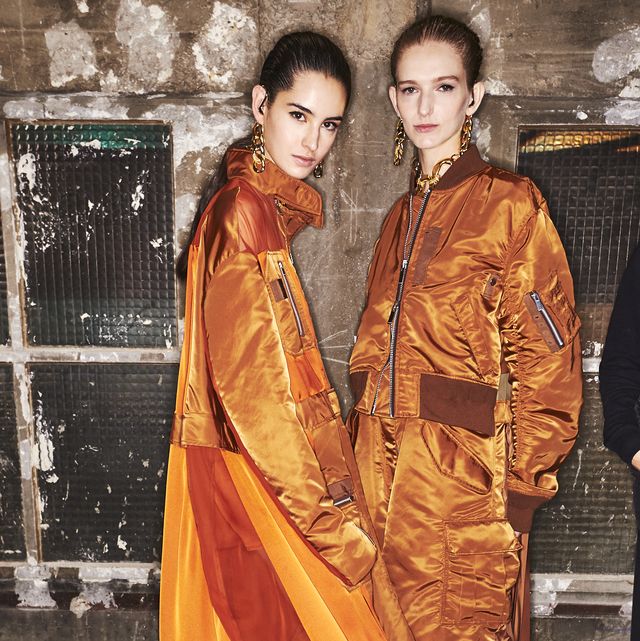 Chitose Abe’s Sacai show began with a line from Gattaca; it was Uma Thurman breathily uttering, “I want to show you something.” A sci-fi dystopia is just the thing for the current moment, but a bad trip wasn’t what Abe had in store for us today. It felt like we were headed to Saturn’s colossal moon Titan on the first-class deck.

Abe was working with silks and tech fabrics, materials with a detectable sheen, and her hybrid silhouettes had an undeniable formality: Tuxedos at the top and bottom of the show turned to reveal they were actually floor-length dresses, and couture-ish shapes were fused to knitwear. Some of the pearl and crystal necklaces, we learned backstage, were actually built-ins.

She’s rarely adopted quite so dressy an attitude. Ultimately, though, this was just a byproduct of her larger mission. An interpreter explained that Abe was thinking about movement. “This time it was really about how the clothes flow when you’re walking. She wanted to call it 4D because movement equates to time.” Titan is just the first leg of the journey, then; this is Interstellar Sacai.

In fact the space prints she used for a long-sleeve midi-dress were made more fluid with the injection of pleats in the back, and on a spacesuit hybridized with a sheer frock, they were actually lifted from NASA photographs, four of them chosen from an offering of 6,000. The estate of Alexander Girard, the mid-century textile designer, was Abe’s other collaborator. She manipulated the letters and numbers that appear on his 2015 monograph, inserting the name Sacai. It appeared on the chest of a floaty dress right where an astronaut’s name would be printed. Girard was chosen, her interpreter said, “because Chitose associates him with positivity, and she always wants to be positive.” If Abe’s piloting, we’d happily make the trip.