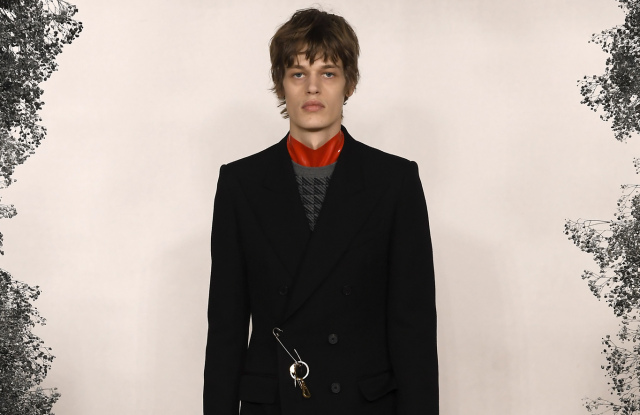 Yeshwant Rao Holkar II, otherwise known as Maharaja of Indore, was an extreme dandy of the decadent 1930s, a prince of untold wealth who lavished fortunes in the jewelry houses of Paris, and turned heads across continents with his bespoke tailoring and exquisitely fashionable wives. Clare Waight Keller caught the exhibition about him that recently closed at the Musée des Arts Décoratifs, and came out impressed by “this incredible drifter through different cities, who decided to abandon India and embrace modernism.” There was something, she said, about the Maharaja’s “cross-cultural traveling” that inspired the characters who were slouching with a certain cowboy insouciance around the Givenchy haute couture salons this morning. But by the looks of them, she might as well have been talking about one of the modern dandies who was sitting in the audience instead, among them the unmissable Luke Day, editor of British GQ Style, who is never seen without his cowboy hat.